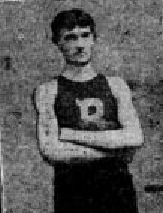 Fred Mulliner was one of the many early stars to grow out of the fertile basketball hotbed of Trenton, New Jersey. Mulliner was a hard working and reliable player who spent much of his career in support of flashy stars such as longtime friend and teammate Harry Hough. Although two years older than Hough, Mulliner remained in the younger man’s shadow throughout the early years of his career. When they joined Bristol as rookies in 1900, Hough became an immediate star, while Mulliner warmed the bench during his first and second pro seasons. Mulliner emerged as an first-rate center during his two seasons (03-04 and 04-05) in Massachusetts. The two years were the among the best of his career individually and with the accumulation of three championship trophies. In 1905, Mulliner signed with a strong independent team in Tamaqua, Pennsylvania.  Midway through the following season, the squad took over the McKeesport franchise in the newly-formed Central Basketball League. For the next three and half seasons in the CBL, Mulliner ranked at the very top of  his profession. He was a good shot either under the basket or from medium distance. Mulliner was popular with the fans and his teammates and well-respected throughout the league as a player who excelled through perseverance more than athletic ability. By 1910, Mulliner’s eleven pro seasons had taken their toll and his effectiveness as a player had fallen off sharply. After two injury-wracked months, he was released by two CBL teams before he returned home to sign with Trenton’s Eastern Basketball League team. While his play revived for his hometown team, he could do nothing to prevent Trenton ignominious tumble into the EBL cellar. At the end of the season, Mulliner announced his retirement.