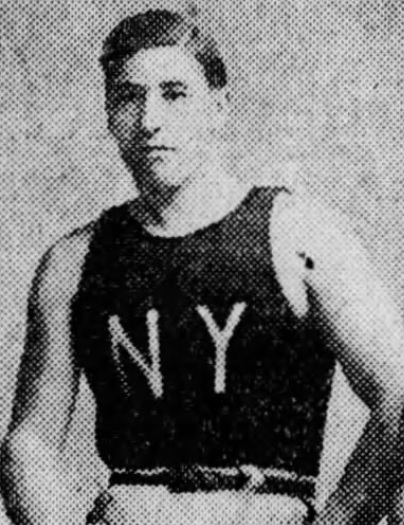 Garry Schmeelk grew up in the Far Rockaway neighborhood of New York City. He began his twenty year basketball career playing for a local team called the Big Atlantics who grew into one of the best independent teams in the Metropolitan New York area. In the fall of 1911, Schmeelk enrolled at nearby St. John’s University in Brooklyn where he briefly played college basketball.  In January of 1912, Schmeelk left school to join the New York Nationals, a professional basketball team that was embarking on the first of four historic barnstorming trips to  the mid-west. Over the next  four years, the Nationals, dazzled fans in Pennsylvania, Ohio, Minnesota and Wisconsin and on the final trip,  California,  with a level of skill  they had never been witnessed before.  Schmeelk emerged as the star of the team because he was a talented athlete who also possessed a likable personality that made made him extremely popular with fans and fellow players alike. By the 1915-16 season, when he led the Interstate League in scoring with 9.3 points per game, Schmeelk had become one of the biggest stars in pro basketball.  The following year, Schmeelk signed as player-coach with  Pittston in the Pennsylvania State League  where he began a successful association with Bucky Harris, the longtime  major league baseball manager who was a also a very capable basketball  player. During his four seasons in Pittston, Schmeelk was perennially among the league’s top scorers. In 1917-18, Pittston captured the PSL championship and during the  1920-21 season, Schmeelk led Pittston to  the first-half championship, but lost the season title in the playoffs. Despite his stocky build, Schmeelk moved well during the prime years of his career. In later seasons, when he ballooned to as much as 225 pounds, Schmeelk used his bulk to his advantage with bull-like charges to the basket. In 1921, Schmeelk returned to New York to play for MacDowell in the new Metropolitan League. Both he and the team enjoyed fine seasons. In 1923-24, Schmeelk enjoyed success as player-coach of the Glens Falls entry in the New York State League. His team won the the championship series and Schmeelk trailed only Benny Borgmann as an individual scorer. In 1925, Schmeelk was named player-coach of the Brooklyn Arcadians in the new American Basketball League. His team won the first-half of the split-season, but lost to Cleveland in the championship series. Schmeelk was fired after Brooklyn began the 1926-27 season with five straight defeats. He was then hired by George Halas to run his floundering Chicago team, but Schmeelk could not turn the situation around and was fired again at the end of the season.