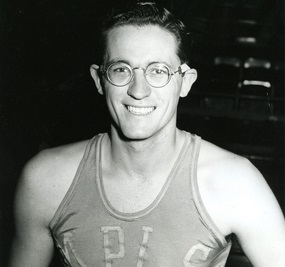 After graduating from Joliet Catholic High School, George Mikan entered DePaul University in the fall of 1942 as a shy, awkward 18 year old. With a tremendous amount of hard work under the tutelage of De Paul head coach Ray Meyer, Mikan emerged four years later as the greatest college player in the first fifty years of the game.  Mikan was named College Player of the Year twice and an All-American three times. He led DePaul to the National Invitational Tournament  title in 1945. On route to the championship, he broke the collegiate single-game scoring record with 53 points.  In 1946, Mikan was signed to his first professional contact by the Chicago American Gears of the National Basketball League. Mikan scored 16.5 points per game in his rookie year, and led the Gears to the NBL championship. Before the start of the 1947-48 campaign, Maurice White, president of the American Gear Company and owner of the Chicago team, pulled the club out of the NBL and created a 16-team circuit called the Professional Basketball League of America, in which he owned all of the teams. The new league lasted less than  a month, and the players on White’s teams were distributed by a lottery to NBL franchises. Mikan was assigned to the the first-year Minneapolis Lakers. In his first season with the Lakers, Mikan led the league in scoring, was named league MVP and the Lakers won the NBL title. The following year, Minneapolis and three other franchises abandoned the NBL and joined the two-year old Basketball Association of American.  Mikan led the new league in scoring, and the Lakers won the BAA championship. In 1949, the BAA and NBL merged to form the NBA. Mikan led the new 17-team league in scoring with 27.4 points per game and the Lakers won the first-ever NBA championship. Mikan scored 31.3 points per game in the playoffs. During the 1950-51 regular season, Minneapolis posted the best record in the NBA. In the post-season, Mikan fractured his leg before the Western Division Finals and with Mikan hobbled,  Minneapolis lost the series to Rochester  3-1 . The following season, the same two team faced off in the finals, but with Mikan healthy, the Lakers prevailed 3-1.  Minneapolis added two more titles in 1953 and 1954. Mikan retired after the Lakers’ 1954 championship run. In the middle of the 1955-56 season Mikan came out of retirement to help the Lakers who were struggling in the standings. He played in 37 games for the Lakers and averaged only 10.5 points and at the end of the season retired for good. His impact on professional basketball far exceeded anyone else to that point in the history of the game. In his nine professional seasons, two in the National Basketball League, one in the Basketball Association of America, and six in the National Basketball Association, Mikan’s teams won seven championships.  In 1956, Mikan was an unsuccessful candidate for the the United States Congress. In 1957, Mikan was hired to coach the Lakers, but resigned at mid-season with a dismal 9-30 record. For the next decade,  Mikan  concentrated on his law career  and other business interests. In 1967, Mikan became the first commissioner of the American Basketball Association, a new  league to rival the NBA. He invented the league’s trademark red-white-and-blue ABA ball.  Mikan resigned from the ABA in 1969. In the mid-1980’s, Mikan headed a task force with a goal of returning professional basketball to Minneapolis.  This bid was successful, leading to the inception of a new franchise in 1989, the Minnesota Timberwolves. Mikan died in June of 2005 at the age of 80.