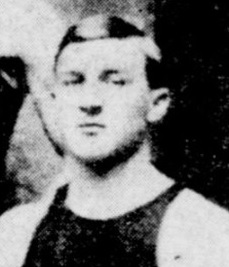 George Morris remains one of the least appreciated and overlooked  figures of the early years of professional basketball. Morris had a noteworthy career that spanned twenty seasons as one of the premier defenders in the early years of the professional game. Morris was a quiet, taciturn man whose exploits were overshadowed by his more flamboyant teammate, Andy Sears. Morris starred at Reading, Pennsylvania High School and then at age 19 joined his hometown professional team. Playing as independents, the Reading squad won 156 and lost only 19 games over three seasons from 1906 through 1909. Just prior to the start of the 1909-10 season, Morris signed a contract with McKeesport entry in the Central Basketball League. In his first two seasons, the McKeesport team captured two CBL championships. Morris had minimal offensive skills, but he played in an era when it was not a factor. His impact on the team far exceeded his minuscule scoring statistics. He was a relentless defender and intelligent strategist who masterfully directed McKeesport’s defenses. His quiet temperament served as the perfect counter-balance to the volcanic Sears. Over the next half-dozen seasons, Morris remained the most effective defender on the best defensive team of the era. He could dominate a game without scoring. When the CBL collapsed in 1912, Morris returned to Reading where he joined his hometown’s Eastern Basketball League team. Morris and Sears led Reading to two EBL championships in their first three seasons in the league. Morris remained with the team until his retirement in 1925, serving in the later years as player-coach.