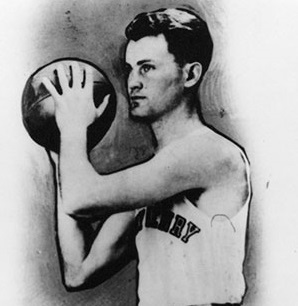 Glenn Roberts is considered by historians to be one of the first players to successfully use the jump shot on a regular basis. Roberts played varsity basketball for four years at Emory and Henry College, a small school located in the state of Virginia. He scored 2,014 points in 104 games, an average of 19.4 point per game – a very big number in an era when most college teams averaged only 35-40 points a game. Roberts was a Helms Foundation All-American in 1935. He had modest success in his abbreviated pro career. In 1939, he briefly played for the Akron Goodyear team in the National Basketball League. Roberts remained employed by the company until 1963 when he resigned to go into business for himself.  At the time of his death in 1980, he was the third largest Firestone dealer in the country.