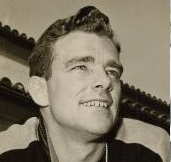 Grant Dunlap played basketball and baseball at  both Occidental College in Los Angeles and University of the Pacific in Stockton. In between, he served as an officer in the Marine Corps during World War II. Dunlap played minor league professional baseball for eleven seasons.  In 1953, he played in 16 games major league games for the St.Louis Cardinals. In 1955, Dunlap returned to Occidental as a coach and athletic director. As basketball coach, he compiled a record of 205-156, as baseball coach a 510-316 record.