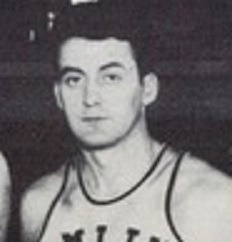 Hal Haskins was a standout player at Alexandria, Minnesota  High School. As a senior in 1943, he led Alexandria to the finals  of the state high school championship and led the tournament in scoring. Haskins was the first-ever Minnesota high school player to score 1,000 points in his career. After service in the Navy during World War II, Haskins enrolled at Hamline University in St. Paul Minnesota in 1946. He played forward for the Pipers for four years, scoring 1,985 points. He established the all-time basketball scoring record of all Minnesota small colleges and earned a spot in the Helms Basketball Hall of Fame.  Haskins led the team to a four straight NAIA Tournament appearances and the National Championship in 1949. Haskins was named to the NAIA Hall of Fame in 1960. Haskins played professional basketball for one season in the  National Professional Basketball League with St.Paul and Waterloo.

Hal Haskins earned both All-Conference and All-American honors in basketball. . His best season was his sophomore year in 1947-48 when he established a record of 605 points which stood for 19 years.