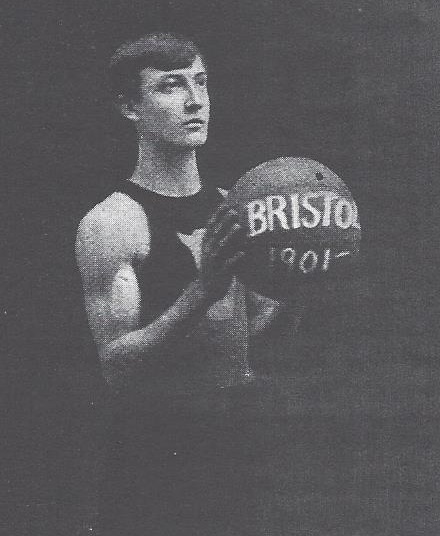 Harry Hough  was the most influential player, on and off the court, during the first dozen years of professional basketball. Hough made his professional debut in 1900 at the age of  17 with Bristol in the National Basketball League. In his very first season, he finished sixth in individual league scoring. In his second season, he led Bristol to the 1901-02 NBL title. During two seasons (1903-05) in Massachusetts, Hough won two individual scoring titles and was a key player on two championship teams. By the time the Central Basketball League was formed in 1906, Hough was undisputedly professional basketball’s brightest and most highly paid star. He possessed incredible agility and speed. He was unequaled in his ability to break free for a clear shot. If a defender played him tight, he would drive around him for an easy layup. If the defender backed off to defend against the drive, Hough could show off the fact that he was among the  best set-shooters of the era. On the court, Hough was an extremely intense, high-strung figure who raged at referees, opponents and even teammates at times. Owners and managers found Hough an equally prickly personality who endlessly battled for a higher salary. From the 1908 through 1911, he was at the peak of his career athletically and financially. Over the four seasons, he jumped back and forth between the CBL South Side and Eastern Basketball League Trenton clubs with dizzying results for the two teams. South Side’s record in alternating years with and without Hough was 43-28, 24-46, 48-22 and 20-34. Trenton’s record was 23-10, 12-28 and 31-12. During this period, he led Trenton to the 1909-10 EBL championship and led the league in scoring. In 1910-11, South Side missed the CBL  championship by a single game  and Hough won another scoring title. Back in Trenton for the 1911-12 season, he won his third consecutive scoring title and led his team to the EBL championship.While still an active player, Hough coached college basketball for two seasons.  During the 1907-08 season, Hough guided the University of Pittsburgh team to a 10-6 record. Hough also coached the Princeton University team  during the 1911-12 season and compiled an 8-8 record. Hough completed his twenty-three year playing career in 1921. Inexplicably, Hough is not a member of the Basketball Hall of Fame.