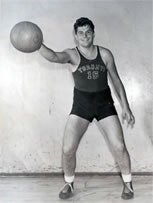 Harry  “Moose” Miller, was born July 28, 1923, in Bronx, N.Y. Miller was a  star player for and graduate of Andrew Jackson High School, Adelphi Academy, Seton Hall Prep and  played freshman basketball for Seton Hall University. He was a veteran of World War II, having served in the Pacific Theater with the U.S. Marine Corps he went on to play for the U.S. Marine Corps while attending the University of North Carolina. He played  professional basketball in the NBA for the Toronto Huskies   Miller played in the first ever NBA game on Nov. 1, 1946, when the Huskies played the New York Knicks.