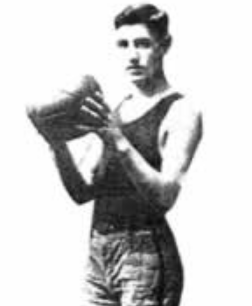 Harry Schwab was one of the greatest high school athletes in the history of the state of Ohio. Schaub  earned 11 letters at Stivers High School in Dayton,  starring in football, basketball and baseball. He was the star of three consecutive  Ohio  State Championship high school basketball teams in 1918, 1919 and 1920.  Schaub was enrolled briefly at Wesleyan College and the University of Dayton, but did participate in sports for either school. Schwab play professional basketball for ten seasons, primarily with independent teams in Ohio . Schwab spent the 1924-25 season with the Cleveland Rosenblums, one of the premier independent pro teams in the country. During the 1929-30 season, Schwab served as player-coach for his hometown Dayton Kelleys who competed in the  championship finals of the National Professional Basketball League, but lost in six games.  Schwab hit .305 during an eight year minor league baseball career,  but never made it to the major leagues  Schwab also was a member of the PGA for 28 years. He was the head pro at Dayton Community Country Club for many years and capped his golf career by winning a Senior PGA Tournament.