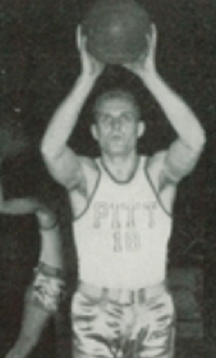 Harry  Zeller graduated from St. George High School in Allentown, were he was a four-year letter winner in football and basketball.  Zeller  play basketball at Washington & Jefferson College from 1941-43. After spending two years in the Navy during World War II, Zeller enrolled at the University of Pittsburgh and played for the basketball team under famed coach, Doc Carlson. Zeller played two seasons for the Panthers, from 1944-46. Zeller averaged 11.5 points per game over his two seasons and shot 71 percent from the field during his senior season. After a brief pro basketball career, Zeller became a respected anesthesiologist. He was director of anesthesiology at Columbia Hospital in Pittsburgh for 20 years and then chief anesthesiologist at Aliquippa Hospital for 17 years before his retirement in 1989.