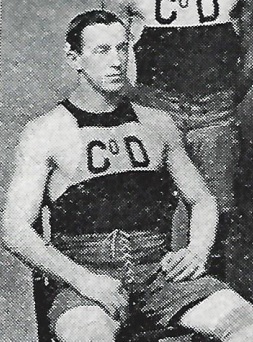 George “Heine” Henschel played professional basketball for seventeen seasons. Henschel grew up in Millville, a small basketball-crazy town in southern New Jersey.  In 1903, Henschel was signed  to his first pro contract by future Hall of Fame coach, Pop Morgenweck, who would remain a major influence throughout his career. By 1906, when Henschel signed to play for McKeesport in the Central Basketball League, he was one of the premier defenders in the game. In an era when basketball was more akin to rugby than  any other sport, the  powerfully built Henschel was also adept at bulling his way down the floor with the ball and delivering it to the scorers on his team. McKeesport improved each of the three seasons Henschel was with the team, culminating with  the 1909-10 CBL championship. In 1910, Morgenweck induced Henschel to sign with Kingston in the Hudson River League. Early the following season, the HRL collapsed and Morgenweck, with Henschel in tow, took over the South Side franchise in the CBL. Before the start of the next season, the CBL collapsed, and Morgenweck and Henschell returned to Kingston, now a member of the New York State Basketball League. Such was the dizzying world of professional basketball in the early decades of the century.