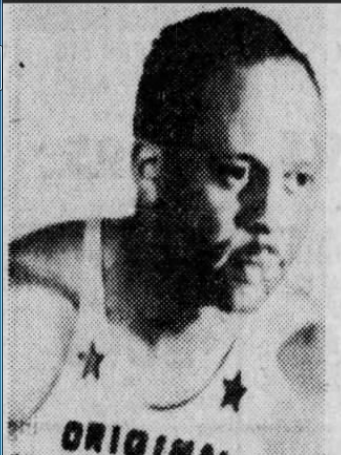 Inman Jackson was second only to Abe Saperstein in creating the phenomenon know as the Harlem Globetrotters. Jackson was the creative genius that transformed the Trotters from one of the dozens of traveling  basketball teams that dotted the Depressiom-era America into a team that became the most recognizable in the history of professional basketball. The team was organized in Chicago in 1926 as the all-black Savoy Big Five. Sports promoter Abe Saperstein acquired the team soon afterward.  In January of 1927, the team debuted in Hinckley, Illionois under the name New York Globetrotters. The name was changed in 1930 to Harlem Globetrotters. It was about this time that Trotters first experimented with intigrating comedy into their games. Jackson was the first to assume the role of “clown prince” on the team. The Globebetrooters  amassed an impressive record over the next decade playing against teams ranging from small town semi-professional teams to titantic battles against the top pro teams of the era, such as the Original Celtics and the Philadelphia Sphas. In 1939, the Trotters  participated in the first World Professional Basketball championship, losing to the  arch-rival New York Rens in the final game. The following year, the Globetrotters won the tournament. Inman was on the court as an integral part of the team from the very early years through the championship game in 1940 and on until his retirement as a player in 1945. Jackson remained with tHe Globetrotters’ organization in various capacities until death in 1975.