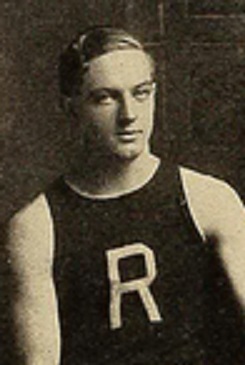 Jack Inglis was the most accomplished all-around players of his generation. Inglis handled the ball with a dexterity and skill that was unmatched. He was also an excellent shooter, a masterfull passer and a dedicated team player. Hall of Famer, Nat Holman, remembered  Inglis as the most graceful player he ever saw on a basketball court. Inglis, a native of Troy, New York, was an outstanding all around athlete who starred at Rensselaer Polytechnic Institute  in baseball, football, track and basketball.  Inglis had his first pro experience with Hudson Mixers of the Hudson River League, but he returned  to his hometown Troy Trojans for the 1910-11 season. The mighty Trojans were loaded with top scorers such as Chief Mueller and Eddie  Wachter, so Inglis made his early mark with his defensive abilities. In 1912-13, when Wachter and Muellner where both slowed by injuries, Inglis stepped into the void and quickly emerged as an offensive star as well. Inglis became renowned for his artistry in shot making. He  developed an unique ability to shoot on the run, a very unusual skill in  the early pro game. When almost all points away from the basket were scored by set shots, Inglis startled everyone by driving toward the basket and leaping into the air and lifting the ball in a controlled arch into the basket. When the Troy team broke up after the 1914-15 season, Inglis and teammate Andy Suils became co-owners of the Carbondale team in the  Pennsylvania State League . During the 1916-17 season, Inglis led the league in scoring and  Carbondale to the PSL title. At the end of season, Inglis sold his share  in the team and signed to play independent ball with a team in Windsor, Vermont. Inglis died unexpectedly in October of 1918,  a victim of the the deadly flu pandemic that sweep through the country from 1918 to 1920. He was just 31 years old. Inglis was eulogized as a well-liked and widely admired competitor. Hall of Fame coach, Pop Morgenweck,  rated him among the top five players he had ever seen play.