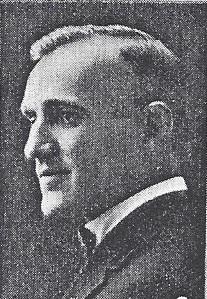 Jack Noll was a native of the tiny upstate New York hamlet of Frankfort. At a shade over 5′ 10″ and never weighing more than 180 pounds, Noll carved out for himself  a niche as one of the most successful centers ever to play the game. Noll had an uncanny ability to outplay bigger and burlier opponents. Noll was an outstanding all-around athlete, who was always in superb condition, an advantage in the days when conditioning was not a top priority. Notable for his skills on both offense and defense, Noll played on two championship teams, 1912-13 Troy (New York State League ) and 1917-18 Pittston (Pennsylvania State League). He also led the NYSL in scoring during the 1919-20 season. In the early years of pro basketball, at the turn of the century, the center was usually not perceptibly bigger than any of his teammates, but by the late teens this had changed. PSL centers were big men such as  6’5″ Dick Leary and Horse Haggerty who  was six inches taller and at least fifty pounds heavier than Noll. Despite this, Noll remained competitive at the tough center position until his retirement in 1922 at age 35. He succeeded because of his defensive skills, superior agility and intelligent approach to the game.