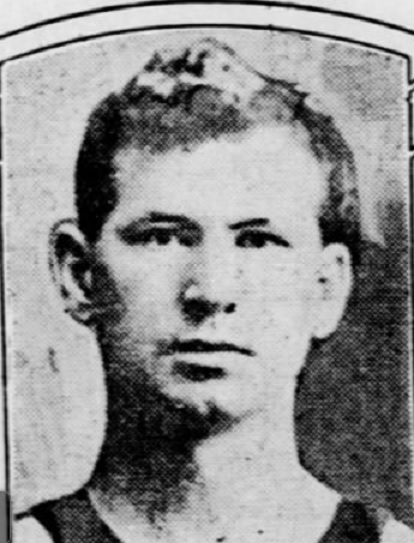 Jimmy Kane was one the few early professional basketball players to attend college. He was a student at St. Thomas College in his hometown of Scranton, Pennsylvania. In his first full professional basketball season (1903-04), he burst onto the scene of the New England League by leading the league in scoring by a wide margin. From the very beginning his cocky, flamboyant style made him popular with fans. His love of sensational stunts, spontaneous plays and difficult passes did not always endear to his teammates, nor did his temper and fast fists win him many admirers among his opponents. Kane was a huge man for the times, at just under six feet two inches and with a playing weight that fluctuated between 220 and 230 pounds. He used his size effectively to score with left handed one-handed stabs at the basket. Kane spent five seasons with South Side in the Central League, then moved on for three years with Trenton in Eastern League. He finished his career with two and a half seasons as a player-coach with Scranton in the Pennsylvania  State League.In his long career, Kane never played on a championship team. To the very end, however, he never lost his ability to taunt other players, joke with fans and beef with referees and all the while dominating play in the cage. Kane also played baseball professionally.  Kane batted .318 during seven years in the  minors  (1907-1915).  In 1908, he  batted .241 for the Pittsburgh Pirates in his only major league season.