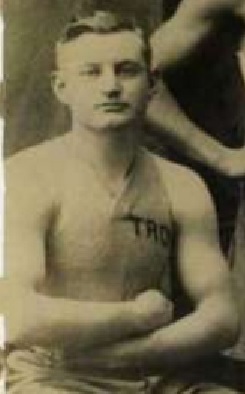 Jimmy Williamson was one of greatest guards in the early history of professional basketball. He paired with Lew Wachter to create the the most formidable and innovative backcourt combination in  the first dozen years of the pro game. Williamson and Wachter revolutionized the game by developing the switch play in defense. Until that time the right guard always covered the left forward and the left guard covered the the right forward. They decided to take whichever forward the one guard was in position to handle. The other guard adapted by covering the other forward. Williamson first joined Lew and his brother Ed Wachter in 1902 while playing for Ware in the Western Massachusetts Basketball League. Over the next ten years, with the Wachters and Williamson as the chief strategists, they operated the best  professional team in the country. First under the sponsorship of Schenectady Co E and later Gloversville Co G, and finally as the representatives of the Troy franchise in the Hudson River League, they dominated all opponents.  They made trips south to New York City, New Jersey, Pennsylvania . They ventured north to Vermont, Maine and into Canada. They toured the Midwest,  once going as far as Butte, Montana. After a decade of success, the partnership broke up midway through the 1911-12 season when Williamson took the opportunity to take over the management of the Cohoes franchise in the New York State League.  Three years later, Williamson retired from basketball and went into the trucking business where he was very successful.