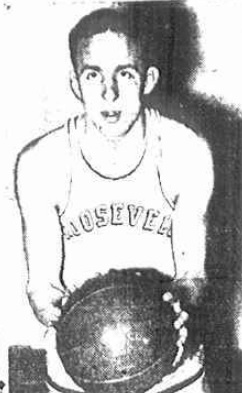 Joe Polcha was star athlete at Roosevelt High School in Yonkers, New York. Polcha’s high school career was brought to an abrupt halt late in  his senior year when he  was cut from the team because it was discovered that he was playing AAU  basketball on the side. Dispite the disapointing end to his high school career, he still had finshed as the leading scorer in Westchester County and was widely accalimed as one of the best players in the Metropolitan New York area. Polcaha played for four seasons in the American Basketball League before entering the army in 1941 to serve in World War II. Pocha’s health declined after the war. He spent the last seven years of his life in and  out of hospitals battling tuberculosis before succumbing in March of 1959 at the age of 42.