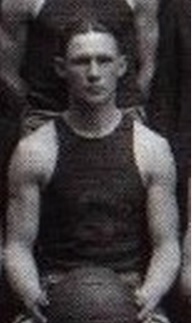 Joe Schwarzer was born in the Austro-Hungary Empire, and moved to the United States when he was four. He grew up to be an amazingly talented natural athlete who excelled at multiple sports while he attended Syracuse University. In basketball, he was an excellent ball handler and fine shooter. He was the designated free throw shooter at a time when one player  shot all  the free throws for a team. Schwarzer was retroactively named a Helms Foundation 1918 All-American. He was declared  ineligible his senior season in basketball by the university due to a ruling by the Athletic Committee that he had used up his varsity eligibility by starting for three seasons already. Besides starring in basketball, he also lettered in football (four times) and in baseball (and was captain of all three teams). Schwarzer was an All-American End on the football team in 1918, a team that went 8-1-1. He graduated with a law degree from Syracuse in 1919. While practicing law in Syracuse, Schwarzer remained active in sports the rest of his life. Schwarzer played professional basketball, on a limited basis, from 1919 to 1928. He was the the head coach of the freshman basketball team in 1924, as the team went 17-0. He was briefly an assistant football coach at Syracuse from 1923 to 1925, and then for a while at New York University. In 1927, he was the head football coach at Manhattan College. Schwarzer was a college football umpire from the 1940’s until his retirement in the mid 1960’s.