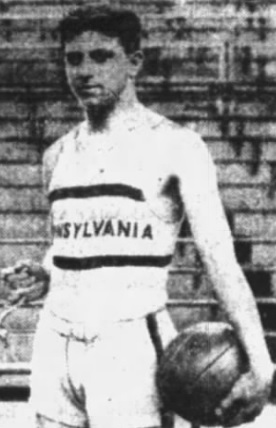 Joseph “Joey” Schaaf was named a Helms Foundation All-American at the University of Pennsylvania in 1928 and 1929. Schaaf led the Eastern Intercollegiate League in scoring  and Penn to  the conference championship both seasons. After college, Schaaf served as freshmen basketball coach at  Penn and coached high school basketball in Philadelphia. In the mid 1930’s , SChaaf began teaching and coaching at Reading Central Catholic High School. His team won the the 1949-50 Class-A State Championship. Schaaf played professional basketball for three and half seasons. In his  rookie season, 1930-31, he led the Eastern Basketball League in scoring. Schaaf, without a doubt,  had the ability to star in the pro game, but voluntarily bowed out after just a few years.