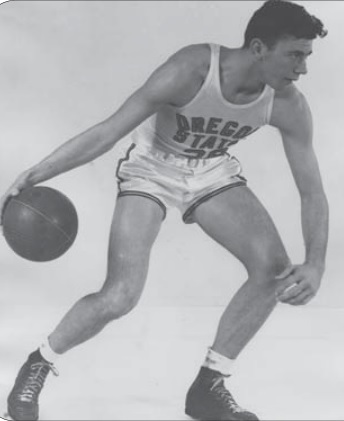 John Mandic was a  basketball and track star at Roosevelt High School in Los Angeles. He played three years varsity basketball at Oregon State where he helped the Beavers win the 1940 and 1942 Pacific Conference titles. Overall, Oregon State had a 64-29 record during Mandic’s three varsity seasons.  In 1942, He was selected to the All-American team. In 1946, after fours years of military service during  World War II,  Mandic  signed to play professional basketball  for the Portland entry in the Pacific Coast Basketball League. He led the Indians to the best record the PCL and averaged 15.2 point a game, third best in the league. Mandic played three more years of professional basketball in the East before retiring in 1950.