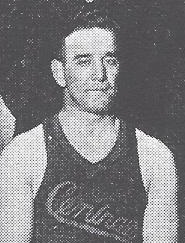 John Murphy was a schoolboy athletic star  in Rochester, New York.  From 1912 until 1919,  Murphy was under contract to Frank Baslow, an early basketball promoter, who annually barnstormed across the country with either the Oswego Indians or Basloe’s Globetrotters. In 1919, Murphy joined the Rochester Centrals, a strong independent team in his hometown. Murphy served as a player, captain and eventually the coach of the team.  Murphy was the manager of the Centrals throughout the 1925–1931 American Basketball league years. He also was coach of the team most of the time and a back-up player the first two seasons. Murphy also  coached the University of Rochester to a 76-57 record during the 1020’s.