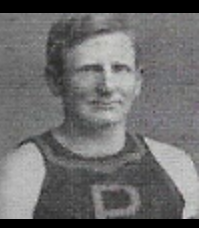 John Plant, known as the “Grand Old Man” and the “Old Roman,”  was active  in professional basketball for a span of  fourteen years. For most of his career,  Plant  was a “standing guard”  who sometimes didn’t cross the half court  when his team had the ball. A fierce competitor, Plant was both admired  and feared.  Although he scored only 16 field goals in 39 games, Plant was a valuable member of the 1901-02 NBL champion Bristol team. When faster teammates like Harry Hough or Charlie Klein could not get the center tap from center Fred Mulliner,  Plant would methodically bring the ball up the court fending off rugby-like scrums with defenders until he could pass the ball to either Hough or Klein near the basket. Plant was the longtime basket ball coach at the Peddie School located in Highstown, New Jersey. His teams won six New Jersey Prep School Championships.  In 1926, Plant moved to Bucknell University were he coached basketball from 1926 to 1932 and track and field from 1926 from until 1947.