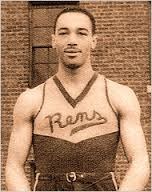 Johnny Isaacs was born in Panama. His family later moved to New York City where he led Textile High School in Manhattan to the the New York Public School Athletic League Championship during his senior year.  Nicknamed “Wonder Boy”, Isaacs moved  directly into pro basketball after graduating from  high school. After one year with the Harlem Giants, Isaacs signed  with the New York Rens where he would play during the prime years of his career.  Isaacs was a member of Rens when they won the prestigious  World BasketBall Tournament in 1939 and with the Washington Bears when they won the same tournament in 1943.  Isaacs was elected to the Basketball Hall of Fame in 2015.