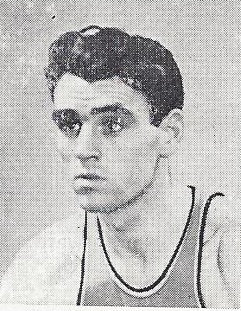 During the 1935-36 season, Johnny Moir led the Notre Dame to a 22–2–1 record and the NCAA National Championship. Moir was named the Helms Foundation College Player of the Year. Over the next two seasons, he led the team in scoring at 13.2 and 10.5 ppg, respectively, while also being named a consensus All-American selection in each of his three years playing for Notre Dame. After graduating from Notre Dame, Moir played  three seasons for the Akron Firestone Company.  in the National  Basketball League. In his first two seasons, the Firestones  he won two NBL championships in 1938-39 and 1939-40.  In 1941, Firestone dropped out of the NBL. Moir remained active in professional basketball for another five seasons with independent teams and a final-13 game stint in 1945-46 with Cleveland in the NBL.