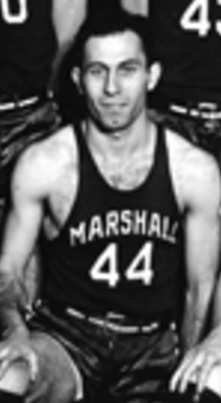 Julie Rivlin was the star of the great Marshall University teams of the late thirties. During Rivlin’s three varsity seasons, Marshall won 75 games and lost only 13. In 1938, he was the second-leading scorer in the nation. Military Service in World War II short circuited Rivilin’s pro career. He played briefly in the National Basketball League  and enjoyed success in the late-forties as the player-coach of Wheeling in the minor-league All-American Basketball League. In the early fifties he owned a sporting goods store in Wheeling until he was hired in 1955 as the head basketball coach at Marshall University. In eight seasons, Rivlin posted an 82-94  record.