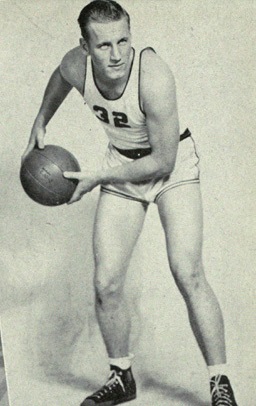 Keith “Kite” Thomas, enlisted in the U.S. Navy directly out of high school, where  he served for four years during World War II. After the war, he enrolled at Kansas State University. As a freshman, he starred on both the basketball and baseball teams. After just one year of college, Thomas signed a contract to play professional baseball. Thomas appeared in 137 major league baseball games over two seasons and spent another six seasons playing minor league baseball. During the 1947-48 season, Thomas played professional basketball for his hometown Kansas City Blues in the short-lived Professional Basketball League of America.