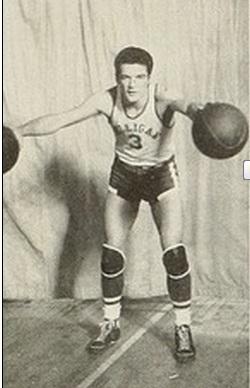 Larry Lee Varnell entered Milligan College in 1935 and graduated in 1939. In basketball, he was the only player in the Smoky Mountain Conference history to be named All-Conference all four years and led his team in scoring every year. He was also All-Conference in baseball.  Varnell served for  five years in the US Navy during Woeld War II in Commander Gene Tunney’s athletic program. He was assigned to the Navy All-Star basketball team at Norfolk, Virginia, where he was the leading scorer on a Navy team that included basketball hall of famers Red Holzman and Red Auerbach.In 1944, Varnell was the player coach of the Navy All-Star basketball team and managed the Navy All-Star baseball team at Pearl Harbor. That team included Hall-of-Famers Stan Musial, Peewee Reese, Bob Lemon and Johnny Mize. Varnell went to Denver in 1946 to play basketball with the Denver Nuggets. In 1949, he worked as head coach and assistant English professor at Regis College and coached their basketball team to the National Catholic Championship and the runner-up in the NAIA Tournament in Kansas City.