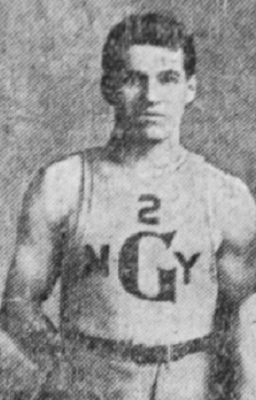 Dell “Lefty” Lennon spent the majority of his career as a member of the Schenectady, New York  Washington Continentals, playing on and off with the team, from the very beginning of his career in 1897 until the very near the end in 1910.  Lennon was also part of a group of players that produced  two of the greatest  teams in the early years of  basketball . The team consisted of  Ed Wachter, his brother Lew Wachter, Jimmy Williamson, Pete Lamb, Jack Fox, Bill Hardman and Lennon, In March of 1905, after playing  on different professional teams for most of the season, they banded together under the banner of he Schenectady Co. E team,  then  traveled to Kansas City where they  won 1905 National AAU title. Lennon was also one of the same group of players on the 1906-07 Gloversville Co. E  team that posted a season record of 50 wins and only three losses, while easily scoring twice as many points than were scored against them. They also compiled a 39-game winning streak that ran from the start of the season (October 25, 1906) through March 28, 1907 in Boston when they were defeated by the East Boston Athletic Association team. This streak was more impressive than the streak that the famed Buffalo Germans would establish a few years later, because  Company E booked games against the best teams available, while the Germans tended to avoid the better teams to keep their winning streak alive.