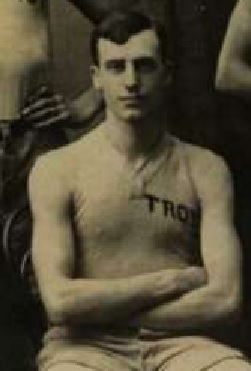 Lew Wachter was one of the most important innovators during the first two decades of professional basketball. Lew, along with his younger brother, Ed, was instrumental in the development of many the playing techniques and rules that are mainstays of the game to this day. They were early advocates of the bounce pass, screens and play patterns. They also were also proponents of the five-man offense in an era when many teams limited the offense to just two or three players. They also campaigned long and hard for the rule that the player fouled must take the free throw. Prior to then, team’s had a single designated player who shot all the team’s free throws. Lew organized and promoted strong independent teams featuring himself and his brother throughout the early 1900’s. In an era when the line between amateur and pro teams was blurred, the Wachter brother’s Company E team of Schenectady, New York won the 1904-05 national AAU title. In 1909, Wachter formed the Troy Trojans as an entry in the Hudson River League. Many of the players had played together on Wachter’s teams in Schenectady and Gloversville, so they brought a strong foundation of teamwork. Over the next five and half seasons, The Trojans compiled a 188-68 record and captured four league titles (two in the Hudson River League and two in the New York State Basketball League). Troy was well on its way to a fifth title when the NYSL disbanded midway through the 1914-15 season. Wachter quickly organized a barnstorming tour that took the Trojans as far west as Montana and saw them win 38 straight games. Wachter contined to barnstorm with teams throughout  New England for the next half dozen years. From 1924 through 1928, he compiled a 59-26 record as coach of  Dartmouth College.