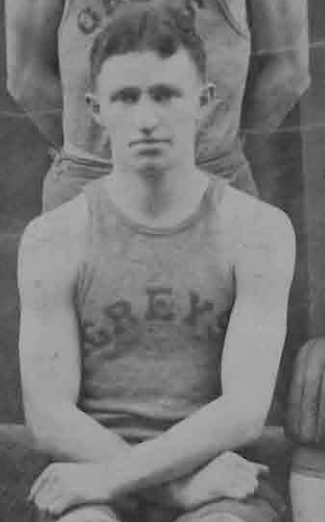 Lou Sugarman was a teenage contemporary and occasional teammate of Barney Sedran and Marty Friedam on New York City’s lowerEast Side. Considered the best of  the bunch at that age , Sugarman won a scholarship to Syracuse University and later played at Notre Dame. Sugarman turned pro with the 1909-10 Hudson, New York team in the Hudson River League. Sugarman’s pro career, that spanned almost twenty seasons, was marked by turbulent relationships with teammates, and frequent outbursts at referees and opponents. Throughout his years in professional basketball, Sugarman remained a highly emotional battler, whose personality often overshadowed his substantial talents as a player. Sugarman was an good ballhandler and a excellent shooter. He frequently shot the ball with one hand, a very unusual sight in the early years of basketball. He led the New York State League  in scoring during the 1913-14 season. His most successful stint with one team was his three year (1914-15 through 1916-17) stay with the Philadelphia Greystock of the Eastern Basketball League, during which the team captured two league championships. On eight occasions during his career, Sugarman was hired as the coach of a professional team, but he never completed an entire season with any team without being fired or resigning. In 1920-21, he coached Princeton University for a half season, but quit in disgust with the comment that the players needed a baby-sitter, not a coach. When his playing career was over, Sugarman, who had graduated from Philadelphia Dental College in 1917, focused  on his dental practice and turned with success to refereeing. He remained among the top echelon of basketball referees for the next twenty years.