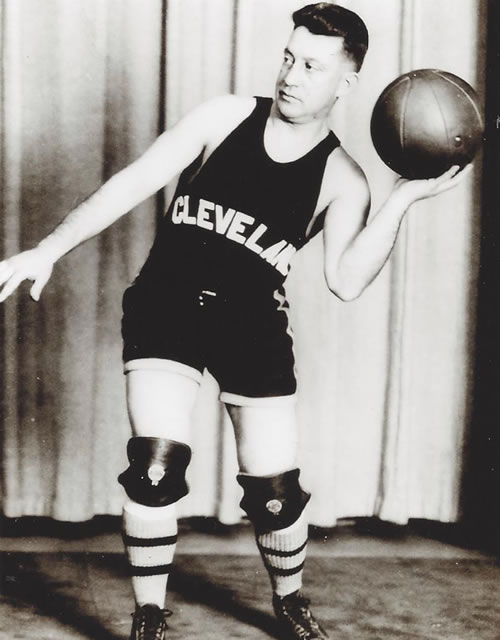 Marty Friedman grew up on New York City’s lower East Side. He learned the game of basketball playing for the University Settlement House, the NYC 1906-08 AAU champions. Friedman first played with Barney Sedran as a teenager. They later joined forces as pros in 1911 and maintained a partnership that stretched over a dozen years and earned them fame as the “Heavenly Twins”. Sedran was the offensive star, while Friedman redefined the way the guard position was played. Most of the outstanding early pro defenders (Jack Fox, Winnie Kinkaide) were stocky, powerfully built men who relied on strength rather than speed. Friedman, at 5’7″ and 140 pounds had the size and agility of the forwards he was guarding. In 1913-14, while playing for Utica in the New York State Basketball League, the “twins” broke Troy’s four-year championship run. The NYSL folded in January of 1915. Three weeks later, Friedman and Sedran signed with Carbondale, an obscure team playing in a minor league in the coal-mining region of Western Pennsylvania. The team reeled off 35-straight wins in the next eight weeks. Many of the games were against minor league teams, but they also defeated many Pennsylvania State Basketball League and Eastern Basketball League teams that ventured into the tiny Carbondale Armory. Friedman played two years in the EBL before he joined the Army at the outset of WW I. While overseas, he organized and participated in the first international basketball tournament. Friedman returned to the pro game in 1919 to renew his partnership with Barney Sedran. Their Albany team won 18 of 19 games to capture the first-half of the NYSL season. In 1920-21, Albany won both halves of NYSL to win the championship outright. Playing for Easthampton, Friedman and Sedran also won the championship of the Interstate Basketball League the same season. In addition to the two league commitments, they played with the independent New York Whirlwinds on Sundays. In April of 1921, the Whirlwinds split two games against the original Celtics in a highly-publicized series in New York City. Nearly 20,000 fans attended the two games, unprecedented numbers at the time. In 1922-23, Friedman and Sedran maintained their hectic pace by playing on teams in the Metropolitan Basketball League,  NYSL and EBL in addition to dozens of independent games.The 1923-24 season saw the split of the “twins” partnership. Friedman was lured to Cleveland by wealthy department store owner Max Rosenblum to build a team that could be a national basketball power. During the next two years Friedman’s team played a strong independent schedule throughout the Midwest. They also engaged in some titanic struggles with the Original Celtics in front of crowds of over 10,000 in Cleveland Hall. Friedman’s squad won the first American Basketball League title in 1925-26. They also won the first half of a split-season the next year, but slumped badly in the second-half and Friedman was fired at the end of the season. Friedman briefly coached in the ABL in the late thirties. He retired early in 1939-40 season as coach of the Troy NYSL team and turned the duties over to his lifelong friend, Barney Sedran.