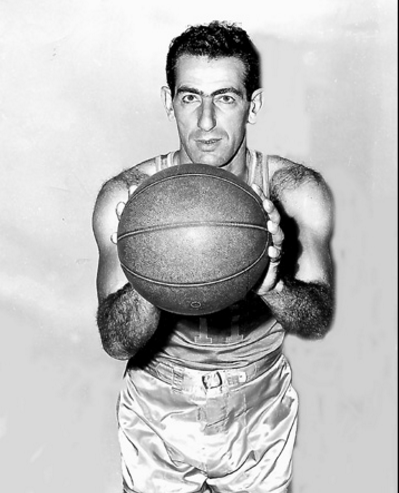 Mike Bloom was a major offensive force during his twelve year pro career.  He first came to prominence  at Trenton High School where named all-state three times and was the star of  teams that  won 41 straight games and three consecutive New Jersey State championships. Bloom, who was  collegiate star at Temple, University originally signed with the Philadelphia Sphas, but couldn’t dislodge veteran center Moe Goldman. Bloom played for Washington and Baltimore the next two seasons before he finally blossomed with the Trenton Tigers in the early 1940s. Despite his 6’6” height (tall for the era), Bloom was not dominating near the basket. A mediocre defender, he was most effective offensively away from the basket. Unlike most centers of the era, he never developed a hook shot. Instead, he scored most of his points on set shots from the outside. Bloom led the American Basketball League in scoring in 1943-44 with 10.5 point per game. Bloom was traded to Baltimore in the middle if the 1945-46 season. The Bullets at the time had 8-8 record and were floundering. Led by Bloom, the team won 19 of its final 25 games to take the ABL title. Bloom finished his career with two seasons in the new Basketball Association of America.