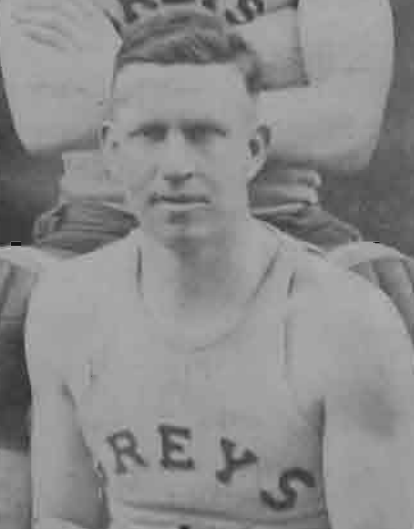 Charles “Mike” Wilson took up basketball as a teenager in Philadelphia. At a shade over 6 feet tall and a well-proportioned 175 pounds, he had the size and strength to match up well with any opponent. He enjoyed a fifteen-year career that showcased his creativety and versatility as a player. At different stages in his career he jumped center, played standing guard, played attacking guard and both forward positions He was good set-shooter, who served as a designated foul-shooter on most teams he played for.  He was also a fine defender who could be called upon when necessary to shadow the other team’s best scorer. Wilson broke into pro basketball in 1902 with the Columbia Field Club in the Philadelphia League. He remained in the league for the next five seasons before he completed a two-year stint with Greensburg in the Central Basketball League. In 1909, Wilson returned to Philadelphia to play for the De Neri . He played center and was the designated foul- shooter for the 1910-11 DeNeri squad that captured the Eastern Basketball League title. In 1912-13, perennial all-star Joe Fogarty took  over the team and stocked it with his ex-CBL teammates. Wilson played only eight games before he was released. In 1913, Wilson signed with the doormat Greystock franchise. With Wilson as a major contributor, the club improved modestly during the next two seasons. In 1915-16, the long moribund Greystock franchise startled everyone by winning its first six games to stake out a position at the top of the EBL standings. Wilson was the club’s leading scorer and rebounder. Unfortunately for Wilson, his old nemesis Joe Fogarty was acquired from Trenton in late January and overnight Wilson found his role on the team greatly diminished. Late in the season, key defender Ally McWilliams went down with an eye injury, and the ever-versatile Wilson filled his position. De Neri went on the capture the 1915-16 EBL Championship. Early in following  season, Fogarty released Wilson for the second time in his career. At age 33, Wilson retired.