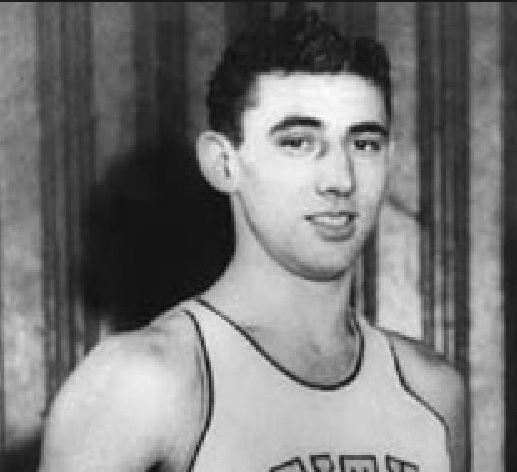 Moe Spahn was a college star at City College of New York under the guidance of famed pro Nat Holman. During his three years at CCNY, the college compiled a 41-6 record and Spahn was named a second- team All-American. In 1934-35, his rookie American Basketball League season, Spahn finished second in league scoring. The next season, he led the league in scoring with just under nine points per game. After shuffling between a half dozen-teams during his first three ABL seasons, Spahn settled with the Jersey Reds where he enjoyed the most successful years of his pro career. Spahn led Jersey to three straight appearances in the championship series in the mid-1930s. In 1936-37 Jersey won the the first half of the split season, but suffered an overtime loss to Philadelphia SPHAS in seventh and deciding game of playoffs. During the 1937-38 season, Spahn reached the pinnacle of his career. He led the Jersey Reds to first place in first-half of split season and then dominated the playoffs to lead to Reds to the ABL championship. Spahn was named league’s MVP for his heroics.  Spahn was the consummate offensive player. He moved well with the ball, was a fine set-shooter and was adept at driving to the basket. In his first six ABL seasons, he never finished lower than 4th in the individual scoring race.