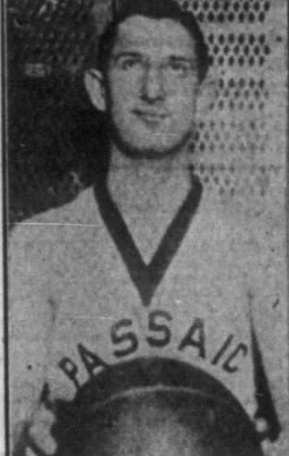 Pro basketball in the 1930’s was dominated by slow, methodical playmaking that featured one or two exceptional outside shooters.  Solomon “Mooney” Levine was one of the best shooters around for many years.  Mooney was named to the All-New Jersey State High School basketball team in both his junior and senior years.  Mooney had feelers from a number of colleges, but in the teeth of the Depression, he chose to remain in Passaic  at a time that New Jersey city was a hotbed of independent basketball that could provide him with some  much needed income. His longest associations were with the Passaic YMHA, and in later years, the Passaic Kenyons.  Levine remained immensely popular in Passaic throughout the decade. In the late 1930’s, Levine played minor league professional basketball in upstate New York.  He was the leading scorer in the New York State League at the time it suspended operation in December of 1939. After service in the Army during World War II, returned to Passaic where he finished the final two years of his pro basketball career.