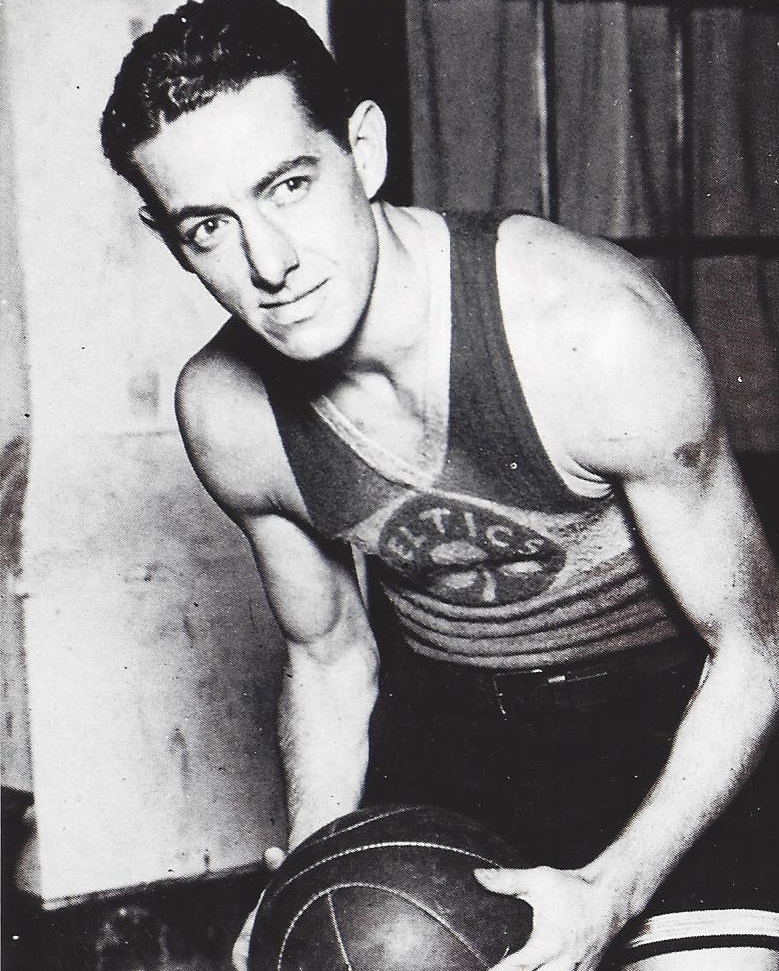 Nat Holman was among the most influential figures in basketball’s first fifty years, first as a player, and later as a coach. In the rough and tumble world of the professional game, he always maintained an aura of a gentleman. Holman, a highly disciplined man who rarely showed his emotions on the court, was a role-model to a whole generation of players in his athletic ability and temperament. Holman was the best all around player of the 1920’s. He excelled at shooting, passing and defense. He was always on the move, cutting and darting about the court. No player in the history of the game to that point, had displayed such a incredible range of offensive and defensive skills. Holman played college ball at the Savage School of Physical Education in New York City  where he was tutored by the old New York Wanderers’ star John Wendelken. Barney Sedran was another mentor who influenced and help mold Holman’s talents. Holman turned pro in 1916. By the 1920-21 season he was the biggest star in the game. He led the Eastern Basketball League in scoring and guided Germantown to the league title. Holman played along side Sedran and Marty Friedman on the New York  Whirlwinds until he was signed by Original Celtics’ owner Jim Furey. From the 1921 through 1928, the Celtics reigned supreme. Holman was a star among stars, the most famous and most emulated of the famed Celtics. The Original Celtics won the American Basketball League championship in the 1926-27 and 1927-28 seasons. Before the 1928-29 season, the ABL broke up the Celtics with the majority of players shipped to Cleveland.  Holman formed a new team to represent New York, but it was not successful. Holman toured occasionally with the Celtics in the early thirties, but devoted most of his energy to his coaching duties at the  City College of New York. Holman had become head coach of CCNY in 1919 at the age of 23. While still in his prime as a player and playing over a hundred games a season, he also coached the college squad with great success. Overall, he coached CCNY for 37 years to 422-188 record. Holman’s 1950-51 CCNY squad was the only team to win the NIT and NCAA titles the same year. Unfortunately, Holman’s triumph quickly toured to tragedy when it was discovered that the players on his championship team were deeply involved in what turned out to be the worst betting scandal in the history of college basketball. Holman himself was untouched by the scandal, but it left him disillusioned and he resigned in 1952. He returned to coach CCNY in 1955-56 and 1959-60 before resigning for good with a .692 winning percentage. Holman also wrote four successful books about basketball and conducted coaching clinics in dozens of counties around the world. Holman was elected to the Basketball Hall of Fame in 1964.