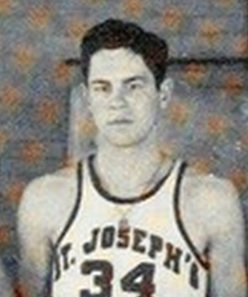 Neal Mosser had just completed  his third year at St.Joseph’s College in Rensselaer, Indiana when he was contacted about an  opportunity to accompany the  Columbus Bobb Chevrolet team on a trip to Chicago to play in World Pro Basketball Tournament.  Columbus lost the game  by a respectable  eight  points against the NBL Sheboygan Redskins and Mosser held his own against veteran pro center, Ed Dancker. Mosser enjoyed his two days in Chicago and what would turn be his only  pro basketball  game, but his career in basketball would last another twenty-five years. After a three year stint in Marines during WWII, Mosser played basketball at Purdue University for one year and then  played two more seasons at the University of Nebraska. By his final year at Nebraska, Mosser was 28 years old and in the stands, watching the games, where his wife and four small sons After his graduation in 1948, Mosser was hired as head basketball coach Omaha Technical High School.  During his  20 years coaching at Tech, Mosser produced a 327-122 record that included the State Class-A Championship team in 1963. Among his players where future baseball Hall of Famer, Bob Gibson, and future NBA stars Bob Boozer and Ron Boone. Gibson acknowledged Mosser as one of the main influences in his athletic and personal development. Mosser commanded great respect from his students. Mosser’s best players were African-Americans and where some coaches may have been reluctant or dead set against to play an all-black starting five, he wasn’t. In the 1950s and ’60s in an arch conservative and predominantly white state like Nebraska that wasn’t a popular thing to do, but he did it anyway.