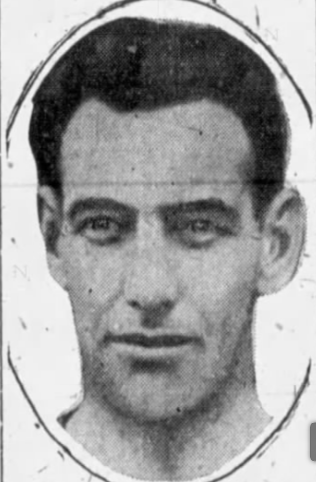 Alexander “NIck” Harvey was signed to his first pro contract at the age of 19 by Bill Downey, the longtime coach of his hometown Paterson Crescents. Small, not particularly fast and a weak shooter, Harvey floundered at first in the pro game. He could not break into the tightly-knit Paterson lineup that had been together for nearly a decade. Released during his rookie season, Harvey rejoined the Crescents the next year and gradually over the next five seasons emerged as the team’s most valuable and popular player. Harvey was never a great shooter, but as he grew more confident, he matured into one of the most daring and tenacious players of the era. By the late teens, he was considered one of the best guards in professional basketball and widely admired for his leadership and tactical skills. In the years immediately after World War I, Harvey enjoyed his greatest successes. In the 1919-20 season, he helped Scranton finish first in the first-half of the Pennsylvania State League and followed up the next season by leading the team to the PSL championship. In 1922-23, he simultaneously captained Paterson to the Metropolitan League championship and Kingston to the New York State League title. In the fall of 1927, Harvey was hired as player-coach of the American Basketball League Rochester Centrals, but was fired late in the season. Harvey completed his seventeenth and final professional season back with his hometown Crescents. It was a fitting conclusion to the career of one of the hardest-working and widely respected players of the teens and twenties.