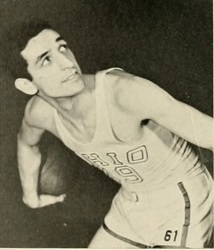 Nick Lalich was born to Serbian immigrants in Lorain, Ohio.  Lalich grew up in Cleveland and attended Ohio University, where he played three years of varsity basketball while obtaining a bachelor’s degree, before  went on to Columbia for his master’s degree. In December of 1941, Lalich joined the U.S Army.  The following year, he was recruited into the OSS, where his knowledge of the Serbian language and culture made him a valuable asset.  Lalich became a key figure in the war in Europe, leading the Halyard Operation. This operation involved going into enemy territory in Yugoslavia and rescue downed Allied pilots. After the war, Lalich briefly played professional basketball with the Youngstown Bears, in the National Basketball League.