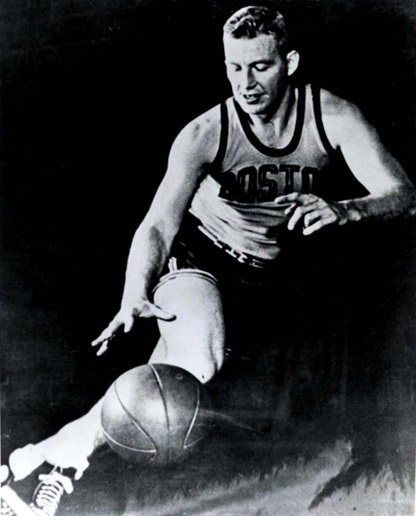 Norm Baker was voted Canada’s top basketball player of the first half of the 20th century.  At age 19, Baker was a member of the Victoria Dominoes, the Senior National basketball Championship team in 1939. With Baker in a staring role, the  Dominoes won two more national championships in 1942 and 1946. Baker turned professional in 1946,  but was released after  only four games for the Chicago Stags of the Basketball Association of America. Baker played for two years as a member of the Vancouver Hornets in the  Pacific Coast Professional Basketball League.  Baker finished second in league scoring in 1946-47 season with 18.6  points per game average.  In the 1947-48  season, he led the PCL in scoring with 20.8 points per game average. Baker also played two years for the New York Celtics and the Boston Whirlwinds, the traveling opponents of the Harlem Globetrotters. Following his basketball career, Baker worked as a police officer and coached basketball and lacrosse.  Bakerwas inducted into the Canadian Sports Hall of Fame in 1978 and Canadian Basketball Hall of Fame in 1979.