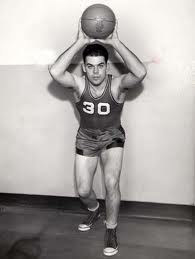 Otto Graham was a three-sport star at Northwestern University. He was named All-America halfback in 1943, All-America basketball in 1944, and was a .300-hitting outfielder in baseball. He is one of just a few student-athletes to earn All-America honors in both football and basketball at a Division I school. In 1956 he was selected to the College Football Hall of Fame. After service in the U.S. Navy during World War II, Graham played professional basketball for one season, as a backup guard, for the Rochester Royals, who won the 1946 National Basketball League championship.  Graham starred as quarterback of the Cleveland Brown for ten seasons, Graham  took the Cleveland Browns  to the title game in each season from 1946-55. Overall, Graham Led the Browns to seven professional football titles, and was  selected to All-Pro quarterback for 10 straight years. .Graham never missed a game as a as a pro while passing for 23,584 yards and 174 touchdowns. He finished his career with an astounding 105-17-4 regular-season record. In 1965, Graham was elected to the Pro Football Hall of Fame. In 1994, Graham was picked for the NFL’s 75th anniversary team.