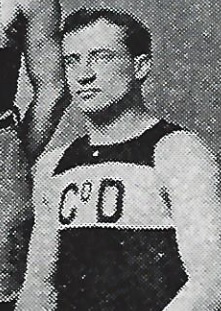 Pat Doyle was born in Northern Ireland and came with his family to Manchester, New Hampshire as a child. Doyle was talented athlete who was adept at both baseball and basketball and also was a fine wrestler. Doyle began playing professional basketball in 1902 with his hometown team in the New England Basketball League. It was the beginning of  pro career that would span a  dozen seasons.  Doyle  was a capable scorer and a feared defender who intimidated opponents with a combination of athleticism and his  hair trigger temper. During the 1904-05  season, Doyle led Nashua to the finals of  the NEBL, but lost to Natick. In 1912, Doyle was a member  of the New York State League champion, Troy Trojans. Doyle died in France, in May of 1915, while serving as a member of the British army during World War I.