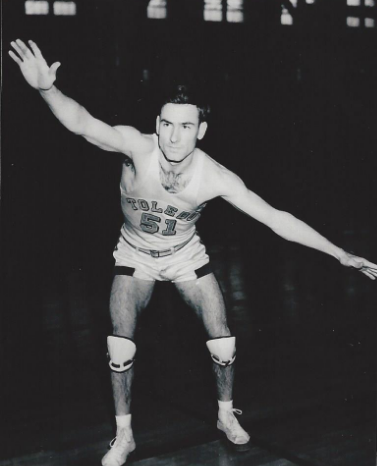 Harold “Pat” Hintz played independent basketball for four seasons nefore he entered Toledo University iin 1937 as a 23 year old freshman. During his four varsity seasons between 1938-1941, Heitz played on some of the most successful cage squads in Toledo Unversity history. Heitz played on teams that went 52-22.  Hintz was was an excellent ball handler and a great defender and the team’s second-leading scorer each of his three seasons. He captained the 1940 squad that won 24 games, the most in a season by any Toledo team.  After graduuation, Hintz briefly played professional basketball before entering miliary service during World War II.