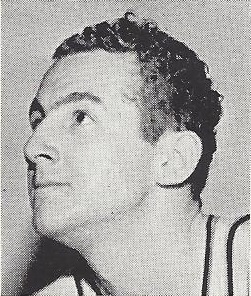 Lou “Pick” Dehner was a football and basketball star at Lincoln, Illinois High School .  Dehner went to college at the University of Illinois where he became a two-time basketball All-American.  In the March of 1939, just days  after his final college game, Dehner played professional  basketball for a few weeks. He toured with a team of recent Illinois grads playing games throughout the state and making a one game appearance in the World Professional Basketball Tournament in Chicago.  He also scored scored 15 points in a single game appearance for the Hammond team in the National Basketball League. Dehner never played professional basketball again. In the fall of 1939, he took a position as the  athletic director and head boys’ basketball coach for East St. Louis High School. Dehner  remained at the school until 1974, compiling a record of 549–350.