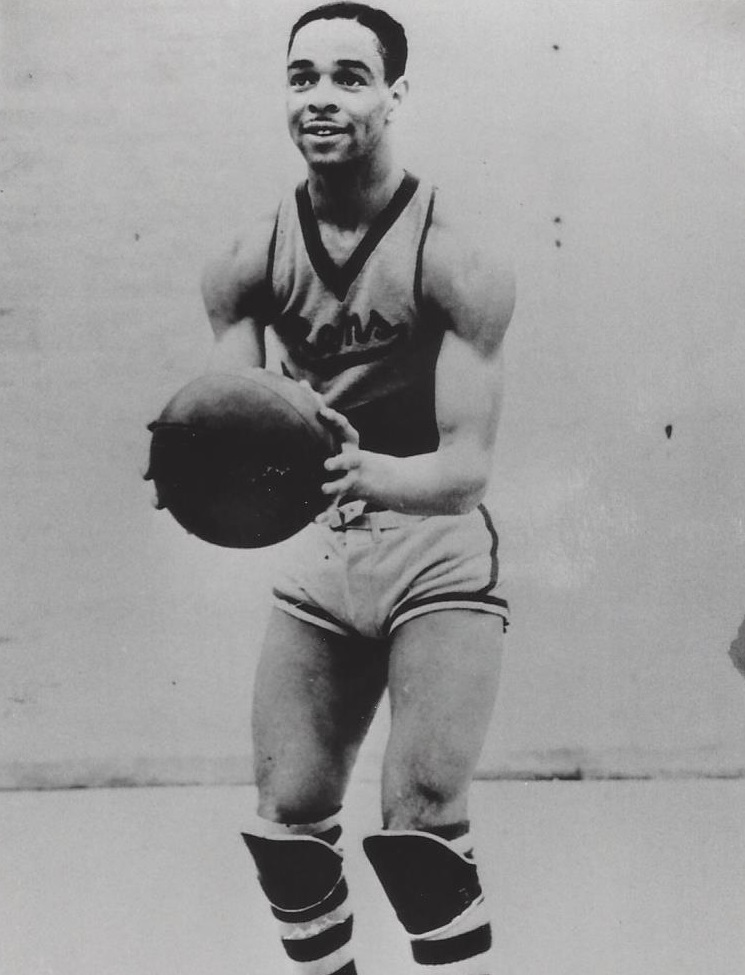 Pop Gates graduated from Benjamin Franklin High School in New York City. In his senior year (1937-38), the school won the city championship and Gates was named a first team all-city star. In the fall of 1938, Gates joined the famed New York Rens. Remarkably,within a month. Gates was a starter on the veteran Rens’ squad. In April of 1939, Gates led the Rens to the World Professional Championship in Chicago with 12 points in the title game. Just one year out of high school, Gates had established himself as one of the top players in professional basketball. Gates primary weapon was the set shot, but he also excelled at cutting to the basket. He was also a strong rebounder and outstanding defender. Gates occasionally showed flashes of temper, but he never played out of control. With the exception of just one season, the Rens were always an independent barnstorming team. The World Professional Tournament held in Chicago from 1939 to 1948 offered most black players their only opportunity to compete for a championship open to all teams. Gates used the tournament to showcase his talents. He was the only player to appear in all ten tournaments and was named to the all-tournament team on three occasions (1940, 1942, 1943). In 1943, he was a key member of the Washington Bears title team. During the 1946-47 season, Gates had his first opportunity to play in a professional league. He had a solid season in the National Basketball League performing with a mediocre team that was handicapped by the midseason transfer of the team from Buffalo to Moline, Illinois. He returned to the NBL two seasons later as the player-coach of the Rens who took over a defunct franchise. Gates had another fine season, but unfortunately the club was overaged and overmatched in what turned out to be the swansong season of the Rens. The following year, Gates won a minor league championship with the Scranton Miners and then returned to barnstorming with the Harlem Globetrotters until the mid 1950’s. In 1989, Gates was elected to the Basketball Hall of Fame.