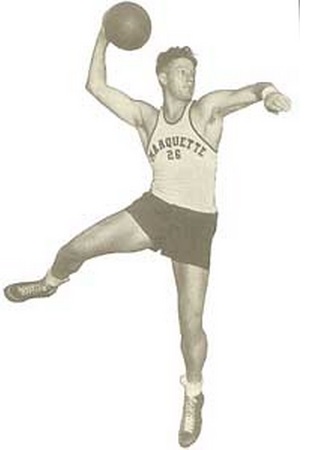 Ray Morstadt was  a football and basketball star at Marquette University.  Morstadt led the basketball team in scoring during each of his three varsity seasons. After acheiving just one season with a winning record during the previous eight years, Marquette  posted posted a 40-14 record during Morstadt’s three varsity seasons.  In 1935, Morstadt joined the Akron Firestones, a longtime AAU power, that had just entered  the Midwest Basketball Conference.  Morstadt led the team in scoring and was a integral  part of the Firestone’s 16-2 record and  capture of the league championship.  In early January of the following year, Morstadt suffered a severe Achilles injury that ended his season and radically changed the course of his career. Mordtadt played for Goodyear for two more  years, but he was never the same player as before the injury.