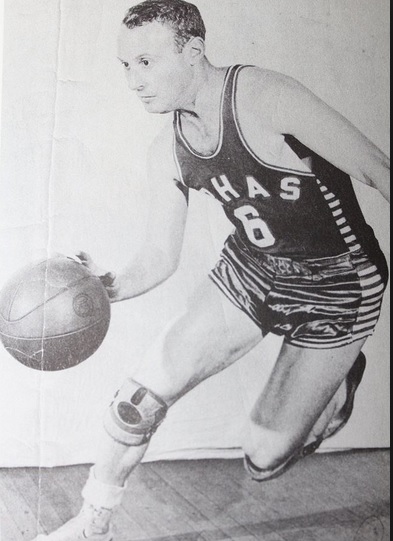 Louis “Red”  Klotz was a 5-foot – 7 -inch guard set-shooter who led South Philadelphia High School to city championships in 1939 and 1940 and later played two seasons for the Villanova University. Klotz  played for the American Basketball League’s Philadelphia Sphas for two seasons interrupted  by military service during World War II.  Klotz was a member of the 1947-48 Baltimore Bullets team that won the championship of the Basketball Association of America. In 1950, Klotz began a 70-year association with the Harlem Globetrotters when he created a team to provide their nightly opposition. Early teams were known  as the New York Nationals, Boston Shamrocks and New Jersey Reds, but were best known as the Washington Generals, named in honor of Dwight D. Eisenhower. Klotz played in games against the Globetrotters until he was in his 60s and  coached his teams until 1995.