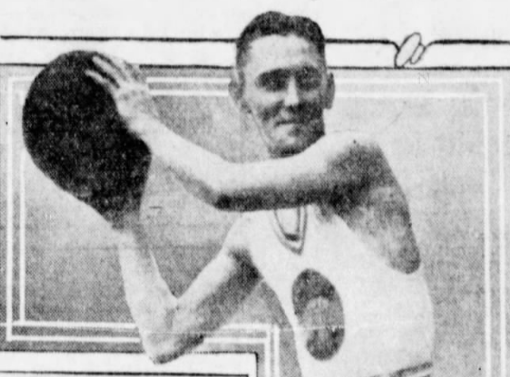 In the spring of 1919, Roger “Rody” Cooney was a short, thin, baby-faced seventeen year old student at St. Francis Prep High School in Brooklyn. Cooney was also an extraordinaryly talented athlete who led his school team to the New York City CSAL basketball championship. In the fall of 1919, Cooney returned to St. Francis Prep to complete his senior year, while simaltaeously signing up to play basketball with an array of Brooklyn professional teams.  Within a month, Cooney had become a “school boy sensation” and a hugely popular figure in the tough world of pro basketball.   The unusal situation went on until late December when the CSAL forced St. Joseph’s to drop Cooney from the high school team. While still a teenager, Cooney was soon recognized as one of the  best players in the Greater New York City area – a position he would retain for over a dozen seasons.

Cooney was a mainstay of the famed Brooklyn Visitation Triangles for sixteen (1921-1936) seasons, While the Visitation never reached the mythic status of the Original Celtics, the team remained one of the top teams in pro basketball for over a dozen years.  Cooney was a key performer on the squads that won Metropolitan League  titles during 1923-24, 1924-25, 1926-27 and 1931-32 seasons. The Visitation also won the American Basketball League title in 1930-31. Cooney was never among the team’s leading scorers, but he was the vital cog that made the Visitation work. He was an excellent ball handler and playmaker. Despite weighing barely 140 pounds , Cooney was tough defender who consistently shut down many of the era’s best shooters. In 1932, while still active as a player, Cooney was hired to  to coach St. Francis College in Brooklyn, where he remained for nine seasons, compiling a 125-77 record.