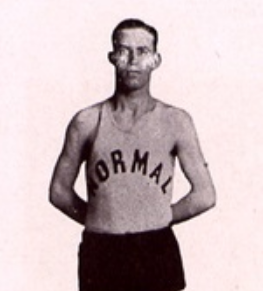 Roy Burris the best athlete at Indiana Normal College (now known as Indiana State)  during the 1920’s. Burris was a three year varsity basketball and baseball star at Indiana Normal. In the late spring of his junior year, Burris attended a New York Giants baseball tryout camp. A month later, Burris was declared inelgible for his senior year of college because of his participation in the camp. Burris played professional baseball for one summers before he returned to basketball. He played in Flint for two seasons and then in the fall of 1928 joined the Akron Firestones, one of the best independent teams in the Midwest.  Burris spent five and half seasons with the Firestones until his career was ended in January of 1934 by a serious leg injury.